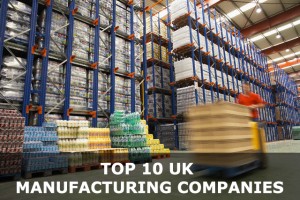 We’ve stated a few times on this website that UK manufacturing is alive and well, despite what certain media outlets will tell you. In fact, you would scarcely believe how much revenue some manufacturing companies based in this country are making! Below are the top 10: Formed following the merger of British soap company Level Brothers and Dutch margarine company Margarine Unie in 1929, it is the worlds 3rd biggest consumer goods company, behind Procter & Gamble and Nestle. Ben and Jerrys, Lynx, Dove, Hellmann’s and Walls are just some of the 400+ brands that they own.

A multinational British-Australian company, with it’s headquarters in London, Rio Tinto is named after the Spanish river of the same name. The river has a mining complex, which the company brought in 1873 from the Spanish Government. Through many mergers and acquisitions, the company operates on 6 continents, and stands as a world leader in the production of aluminium, coal, copper, diamond, iron ore and uranium.

Yet another merger, this time between Glaxo Wellcome and SmithKline in 2000, led to this Brentford based company becoming the 6th largest pharmaceuticals company in the world. While mainly concerned with non-over the counter pharmaceuticals (available only from doctors), they do own quite a few consumer brands too, such as Sensodyne, Nicorette and Horlicks.

The world’s biggest producers of platinum, the Anglo American company was originally founded in Johannesburg, South Africa, by German Ernest Oppenheimer, working alongside American bank J.P. Morgan. They sourced £1 million from UK and US sources (hence the name) to form a gold mining company in 1917. Since then, they have moved their headquarters to London, and become major producers of copper, diamonds and nickel.

Sitting behind GlaxoSmithKline as the 7th biggest pharmaceuticals company in the world, AstraZeneca are a British-Swedish company headquartered in London. Unlike GSK, they don’t offer over the counter products, instead focussing on prescription pharmaceuticals that tackle cancer, cardiovascular and gastrointestinal infections, and respiratory and inflammation problems.

Though based in the UK, BAE Systems supplies defence technology to Australia, America and South Africa. They produce all manner of military vehicles, including the Typhoon fighter jet, the Tornado fighter-bomber plane, the Challenger 2 tank, and the Queen Elizabeth class aircraft carrier.

The Imperial Tobacco Group was originally the Imperial Tobacco Company mentioned above. The American Tobacco Company sold it’s share of the British American Tobacco company in 1911, but the ITC stayed invested until 1980. They also own several cigarette companies, such as Richman, Superkings and Lambert & Butler, but also have a hand in rolling tobacco, owning popular fine cut tobacco brand Drum, as well as cigarette paper brand Rizla+.

While the company (founded by a Canadian in 1935) mainly deals with consumer food brands such as Twinings, Ryvita and Patak’s, they also have a hand in companies such as British Sugar and, weirdly, clothes store Primark!

Rolls Royce is actually two companies. While most are familiar with their automotive division, it is in fact their aerospace and defence division that generates more revenue. You have likely seen one of their jet engines on planes before, as they are the 2nd biggest jet engine manufacturers in the world. Alongside jet engines, they also provide engines for ships and submarines.