Top 10 Products Made In The UK 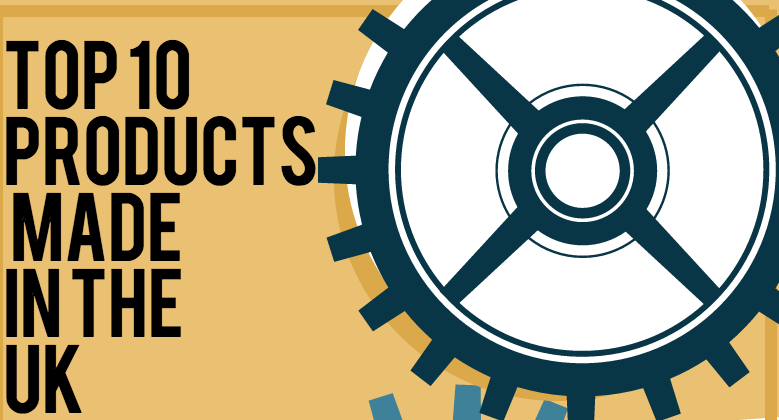 The UK is known for many things, it is an extremely beautiful place, with plenty of countryside and historical places to visit. Many images come to mind when you think of the UK, such as the Queen, cups of tea, maybe even rain…but the products that Britain has produced isn’t usually one of the things it is recognised or regarded for, which is shocking when you consider some of the excellent and astounding products that Britain has produced. This is by no means a comprehensive list, rather it is a list of what we consider to be the most unique and spectacular products that has been produced by Britain throughout time.

Here are the top 10 Products Made In The UK

Despite popular belief this product wasn’t made in India, the traditional home of spice and curries…no this delicious dish was created and produced right here in the UK. This popular dish is now known and eaten globally and it is still being produced in the UK today.

Have you ever wanted to be James Bond, secret agent, driving around in a fancy car? It might shock you to learn that perhaps the most iconic of James Bond cars, the Aston Martin made famous in Goldfinger, a popular James Bond film, was made right here in the UK. Whilst the cars in actual production don’t have the fancy gizmo’s and gadgets that Bond’s did, they are still extremely impressive to look at and drive!

Often considered one of the more reliable tumble driers, Indesit/Hotpoint, make their tumble driers in the UK in Bristol, and they are exported to distributors world-wide.

They say you either love it or hate it, well we must love it because it was invented in Staffordshire in Britain in the late 19th century, and now it is a globally known and loved product.

Made in the Yorkshire Dales these gorgeous pianos bring craftsmen from all over the UK together, to produce stunning piano’s sought after worldwide.

This product has often been confused as being French, when in actuality the guillotine was first made by the bourgeois of Yorkshire in England. Of course, it is no longer in production now, but when it was it was first produced in the UK.

The original and most loved of all the Cadbury’s chocolate bars, although they are all extremely delicious. This product is also exported globally, and enjoyed around the world, developing a global brand for Cadbury’s.

Whist other vacuum cleaner manufacturers have moved their production to abroad, Henry has stuck to his roots and is still manufactured in the UK.

Made in the Cobbs Lane Factory, and still produced in the UK today, Dr. Martens are perhaps the most popular and well-known shoes to come out of Britain.

One of the most famous hat makers known worldwide, David Shilling, developed and made his hats in London. Perhaps his most popular hat was one he made initially for his mother, the Ascot Hat, designed to wear to the Royal Ascot, this soon took off and David Shilling was producing Ascot hats for people worldwide.